Lots of preparation going on in the past weeks to get Quo Vadis up to standard for the Marlay Point Overnight Race (MPONR). Deck organisers replaced, some new clutches and cam cleats, electrical checks, new instruments, life lines, rigging, mast base and foot, sheaves, vang, halyards and sheets. All the expense that goes with buying any boat but in particular a very well kept but under utilised boat that was “original” and “pristine”! We will be racing with the original 1989 sails which should be interesting – they are good enough and away having a second reef put in – just in case! New sails for next season for sure (I just have to save!).

The MPONR has been running for the past 48 years and is one Australia’s iconic trailer yacht races – at its peak attracting almost 700 yachts, now down to about 100 competitors. Competed on the Gippsland Lakes it commences at the Lake Wellington Yacht Club, crossing Lake Wellington, then through the Mclennan Strait, past Hollands Landing, then entering Lake Victoria, north east to Paynesville, into Lake King, around Raymond Island and then back to Paynesville to finish at the Gippsland Lakes Yacht Club. About 75km or 40nm. And of course the race starts at 8pm just after sunset!

The crew has been assembled – Brendan  (the tried and trusty bow man) – who sees himself like this: 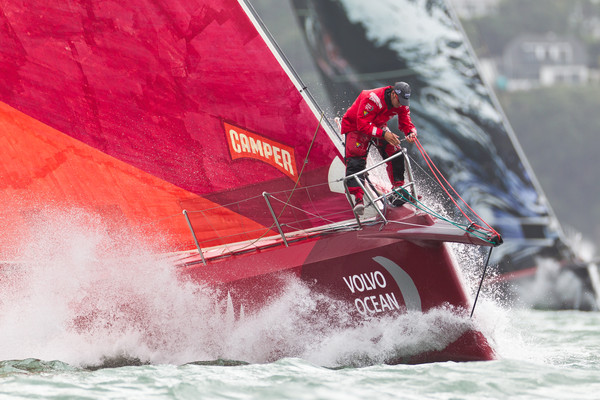 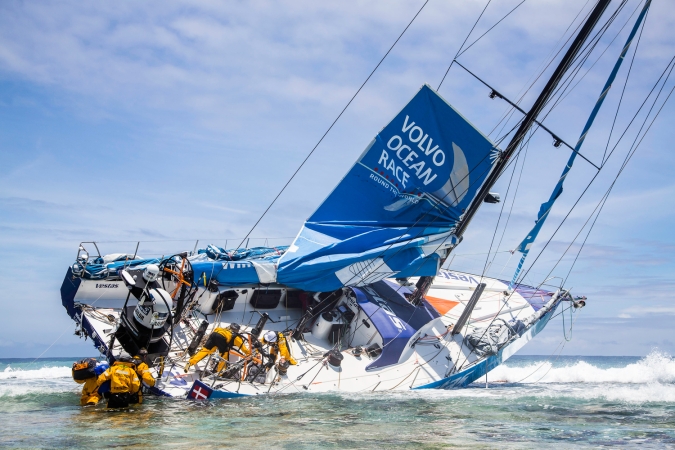 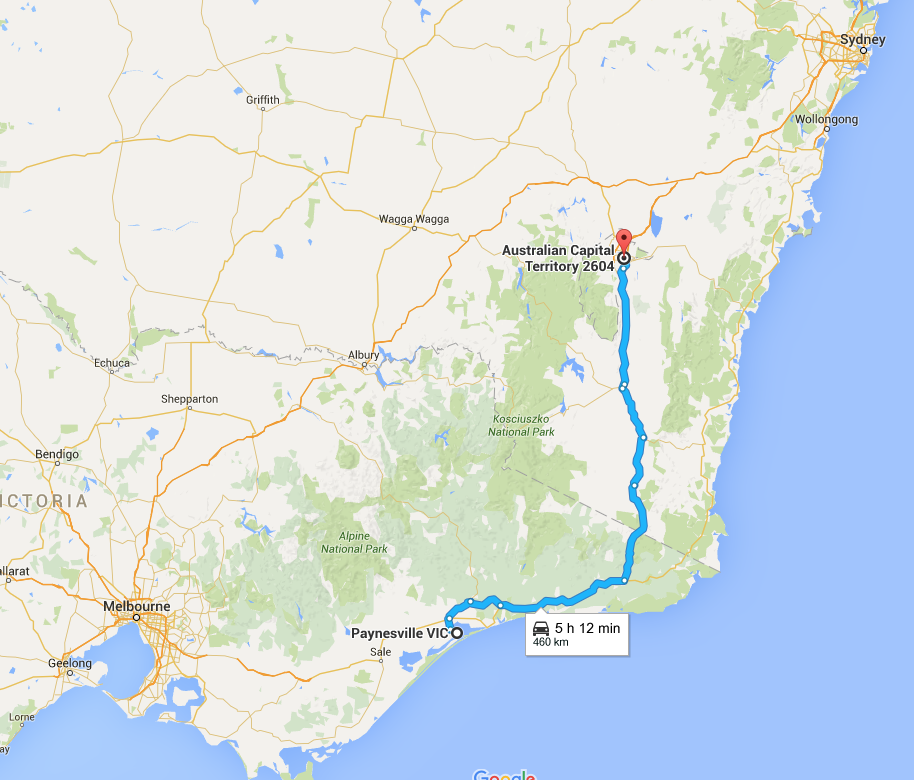 Well we finally got away mid afternoon for the 470km/6hour drive from Canberra to Paynesville. Car and boat all loaded, last minute supplies on board and we were off. After a previous incident in Cooma, and swearing that I would never go into that town again with a boat on a trailer, I succumbed to peer pressure (and broke my New Years resolution) by stopping at McDonalds Cooma. A coffee (really that’s all it was) and we were off again. A quick fuel stop at Cann River, just south of the New South Wales / Victoria border for diesel and we continued on our way south to the coast. There was some debate about where we should stop for dinner – Cann River, Orbost or Lakes Entrance. 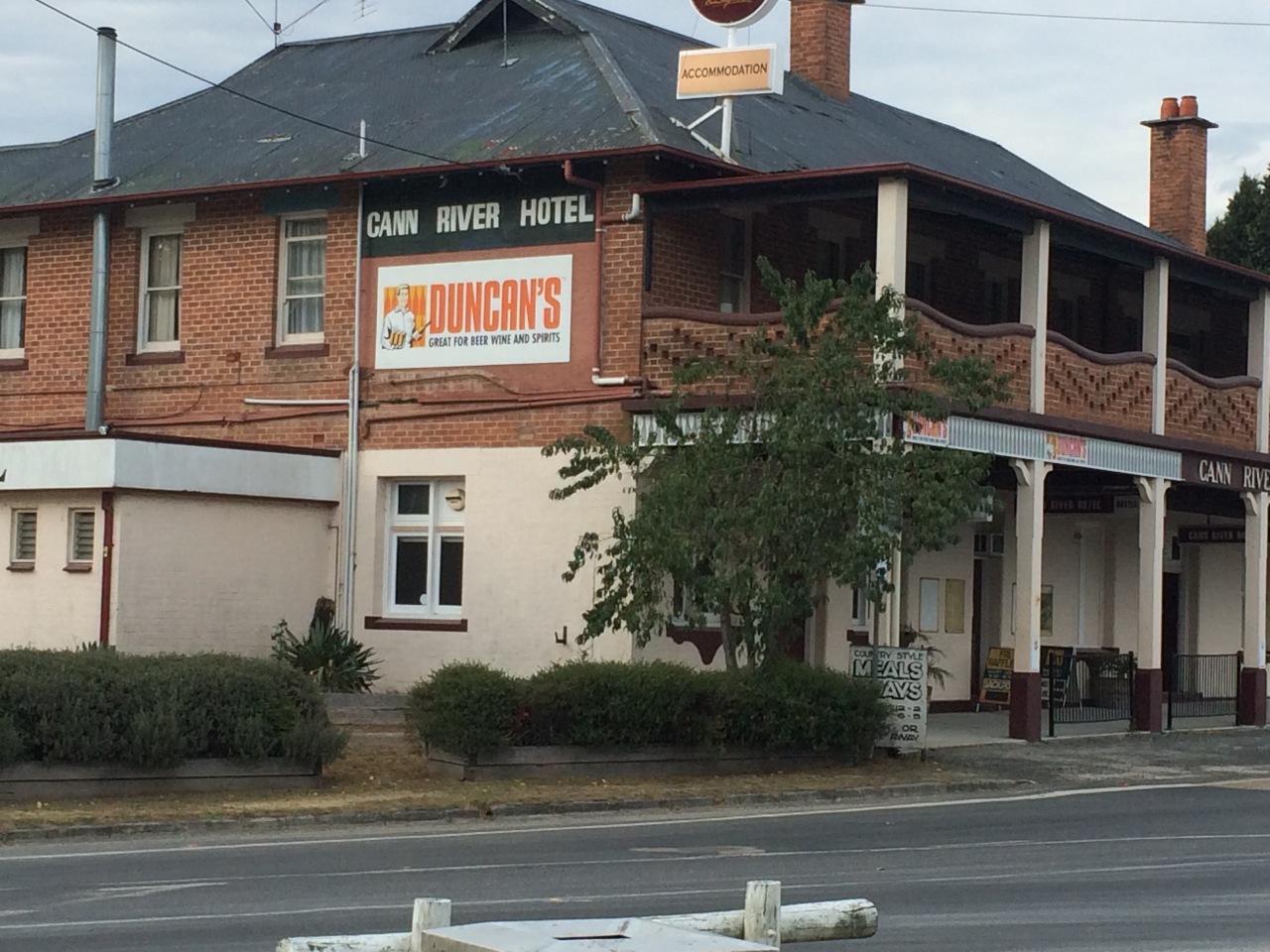 A crew decision for Orbost saw us in the local Chinese takeaway. Enough said . . . we will never return! In future we will either eat at the aptly named establishment at Cann River or Lakes Entrance! We finally got into Paynesville at about 10 pm, in bucketing rain. After a quick de-stow of the car and boat, we slept on the boat in the car park.

Not exactly a restful night, but after a quick breakfast at the “Fickle Fig” in Paynesville, and a trip to the local supermarket we launched the boat and started to retrace the race course in reverse to identify the navigation hazards. We did a quick lap of Raymond Island and then headed west to Loch Sport – a total distance of about 17 nm. Not much wind but we were able to do crew familiarisation on the way. The engine, as is now the norm, sounded particularly unhealthy and was intermittent which only added to the Captain’s normally calm demeanour, especially for the approach through the channel and then entry in to Loch Sport Marina! We survived the arrival and took an outside 15m berth while waiting for the marina manager. After paying the grand total of $35 for 24 hours berthing, shower/laundry access for three and water/electricity and with a stern warning “that the fence around the marina is there to protect you – lock the gates as you go/in out” we headed out to the Loch Sport Marina for dinner.

We were kindly invited to join another Canberra YC crew for dinner at the Loch Sport Pub. The skipper of this crew was on his 32nd consecutive race and we were keen to pick his brains. We were also invited to join the team for the MPONR Yacht Club trophy for the three boats from a single club that achieve the highest placings. No pressure! After more debate and discussion we retired for the evening.

Race Day arrived and after showers ashore and breakfast on board we set off to motor and sail the remaining 19 nm. We took some time to do some spinnaker work, encouraged by the Bowman who begged for more back to back spinnaker gybes just so the cockpit crew and mast man were fully in synch with him! The intrepid navigator spent extra time making sure of our course entering and exiting McLennan Strait and plotting multiple GPS waypoints. Both of these are areas that will have to be navigated at night, under sail, there are limited lit navigation marks, the yacht draws 1.5 metres, and outside of a very narrow channel and we will go aground! No challenge.

Every year I have done it we have gone aground – this year we will well equipped with some bathymetric charts – what could go wrong!? The key area I was concerned about was getting out of McLennan Strait, and making sure that we were lined up with the seven unlit port markers which show the channel into Lake Victoria. The channel is 1.7 metres deep, and about 20 metres wide only The eastern exit of McLennan Strait

After motoring through the Strait we sailed across Lake Wellington and arrived at the start point at about 3pm. Anchoring off the beach we hitched a ride ashore with a local volunteer, registered, bought the obligatory race polo shirt, ate from the dodgy local primary school BBQ food stand and waited for the race briefing. 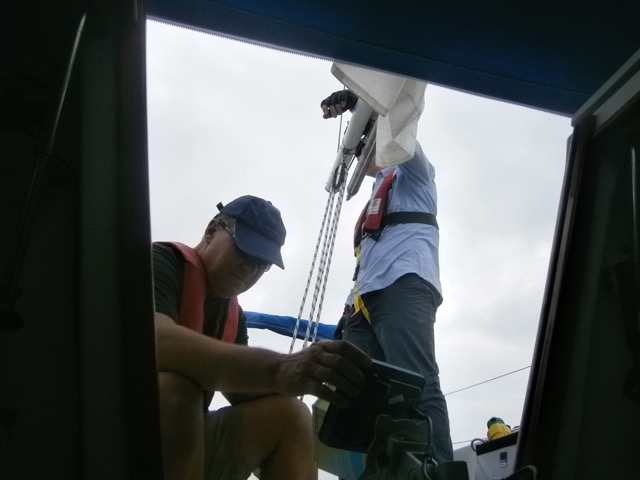 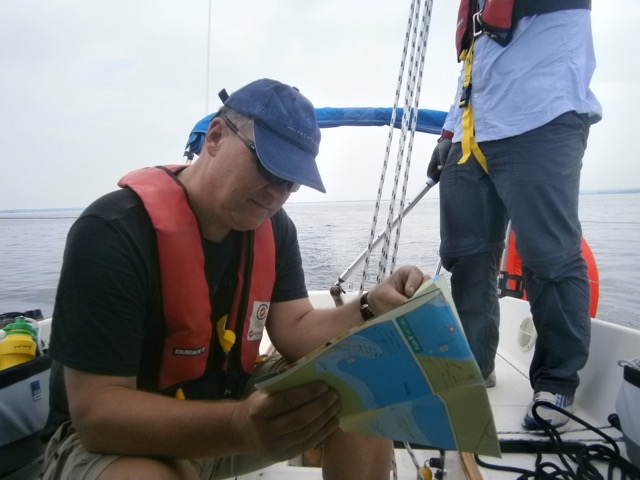 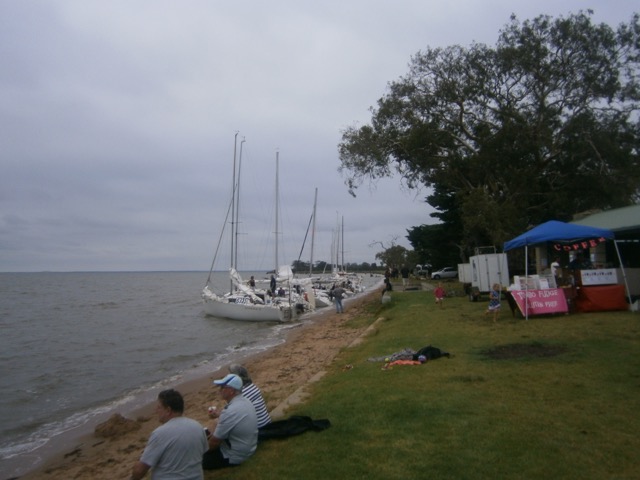 Checking out the competition 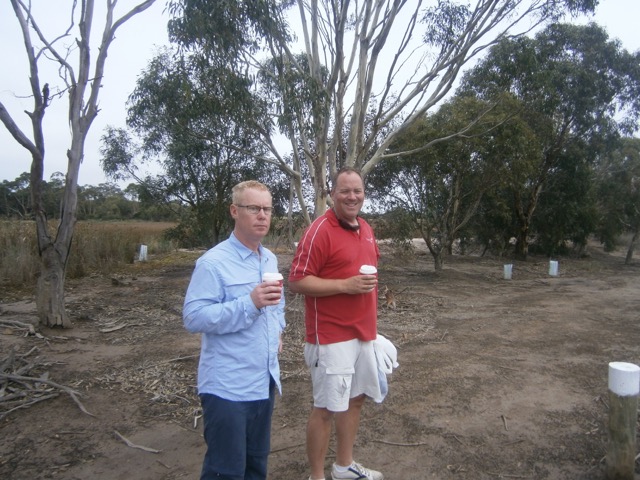 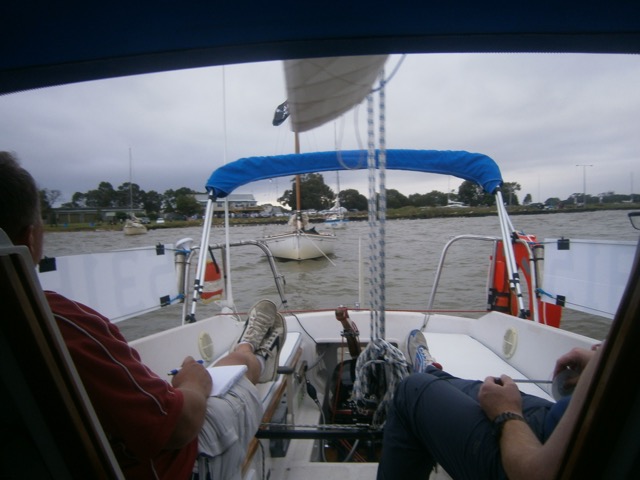 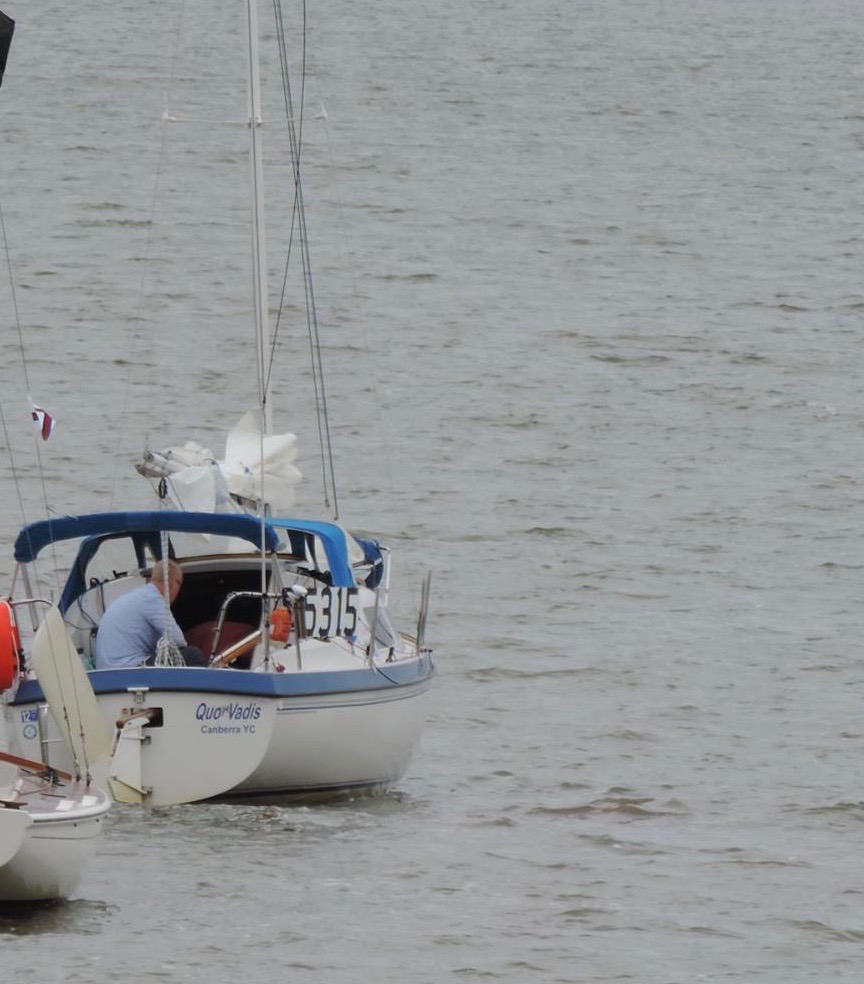 At 1915 we were all set and in the vicinity of the race start area. After a shocking start by the skipper, who was reminded (constantly) by the bowman about how many boat lengths short of the start line he was, we finally got away. Wind on the nose all the way to the Straits at about 5-8 knots. First time sailing the boat at night, with an old blown out genoa – it was difficult to find the right groove for the boat – too often we luffed as we went too high and we potentially sailed a course too close to the wind. In hindsight more of reach might have been better – putting more emphasis on boat speed rather than working to sail the minimum distance.

Stellar navigation by the newest crewman saw us enter the Strait without problem, and make our way through without any concern. The bowman, now getting bored of all of this windward sailing, was given the helm for the run from Hollands Landing, out of the Strait, across Lake Victoria. Tidal flow and increasing wind saw us cracking 5 knots as we navigated out of the Strait from port marker to port marker by torchlight – it all sounds so mundane now but it proved to be one of the most exiting parts of the race! After a few tacks to the south, we were on line for a long run to Paynesville, getting through the finish line for the first time at 0610 before we worked our way around Raymond Island for the final lap. With daylight we found ourselves sailing much better and reeled in a couple of competitors, finally getting the spinnaker up for shy run around the southern side of Raymond Island to make the second and final finish at 0830. Writing about it now I realise that I have already almost forgotten about the 16% moon that set at two hours after the race start, the ⅝ cloud cover, and constant rain for the last 4 hours of the race!

Having been up for 24 hours we went to retrieve the boat onto the trailer, which was then hampered by the snapping of the stainless steel towing eye on the front of the boat used to connect the winch. This is never a problem on a crowded public boat ramp with a 100 other tired boats and crew. Leading by example the skipper quickly purchased a replacement from a local marina store, left it in the capable hands of the crew while he headed to the yacht club to sign the post race declarations! 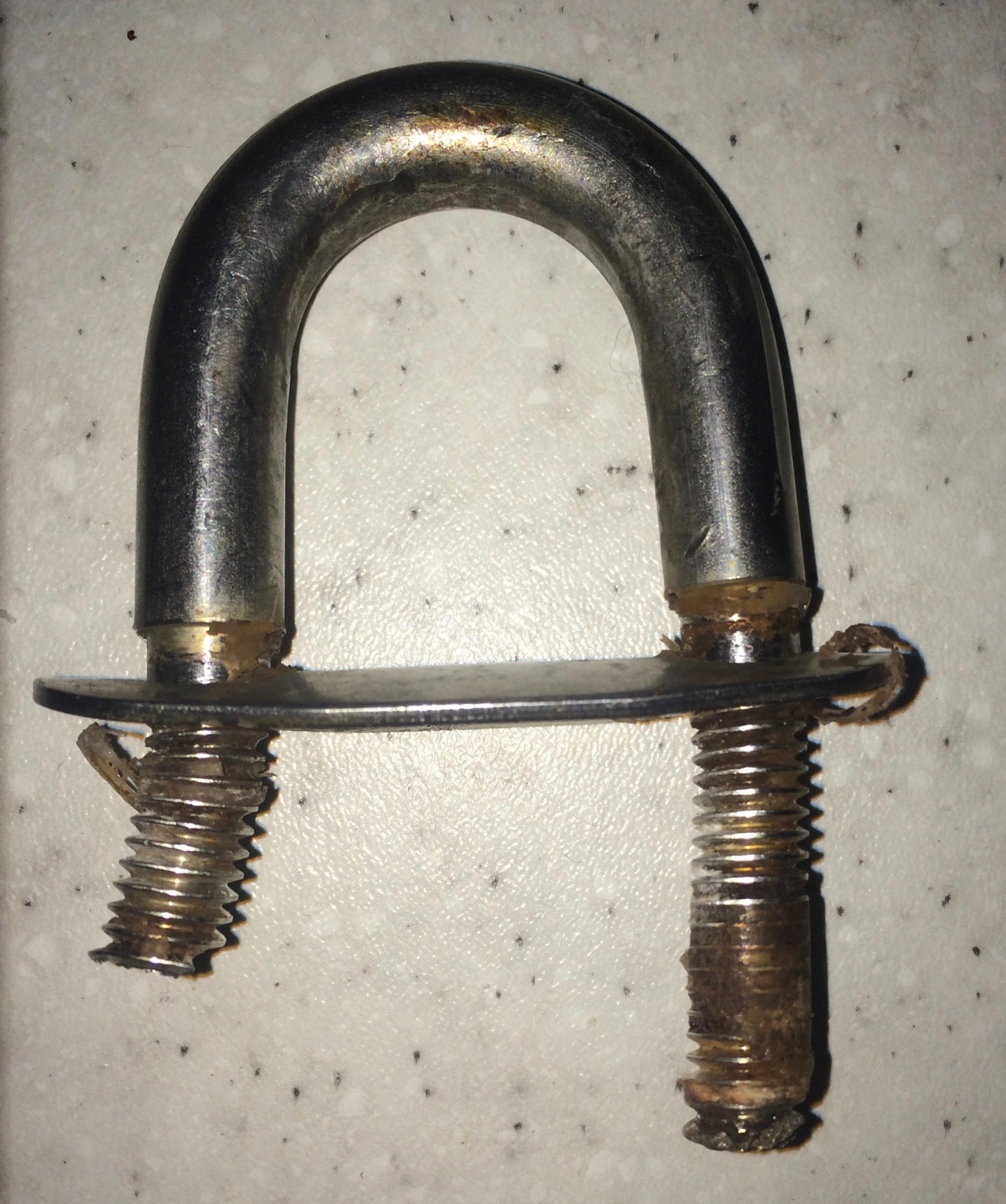 After the outboard problems we made the easy decision to leave the boat, on its trailer, in a mast up storage facility who would wash, polish & wax the boat as well as doing an annual service on the outboard. After delousing the boat and drying it out, we left it behind in Paynesville for the long drive back to Canberra, with plans to return with the family for the Easter Long Weekend in a fortnights time to do some sailing and then drop the mast and bring the boat back to Canberra.

For out first race as a crew, and our first hit out on a new (to us) boat, we had a great time. For the first time in the seven MPONRs I have participated in, we never went aground or had any navigational challenges – all kudos to Sean! The six hours driving home provided time for a useful post mortem of the race. Where could we have gone faster (1) a better start (2) selecting a race strategy that emphasised boat speed over sailing the least distance (3) jib for the Straits to allow for best pointing while running the genoa at all other times – especially if we selected a reaching course (4) new sails would help a lot (now only if Air Nui Guinea came on board as a sponsor!).

All in all it was a great weekend with great friends as crew. I hope to have the privilege of sailing with the same for Marlay Point next year!

I have just added the GPS track. 42.2 nm sailed with an elapsed time of 12:45 minutes with an average speed of 3.3 kt. The maximum sustained speed reached was 6.5 knots.