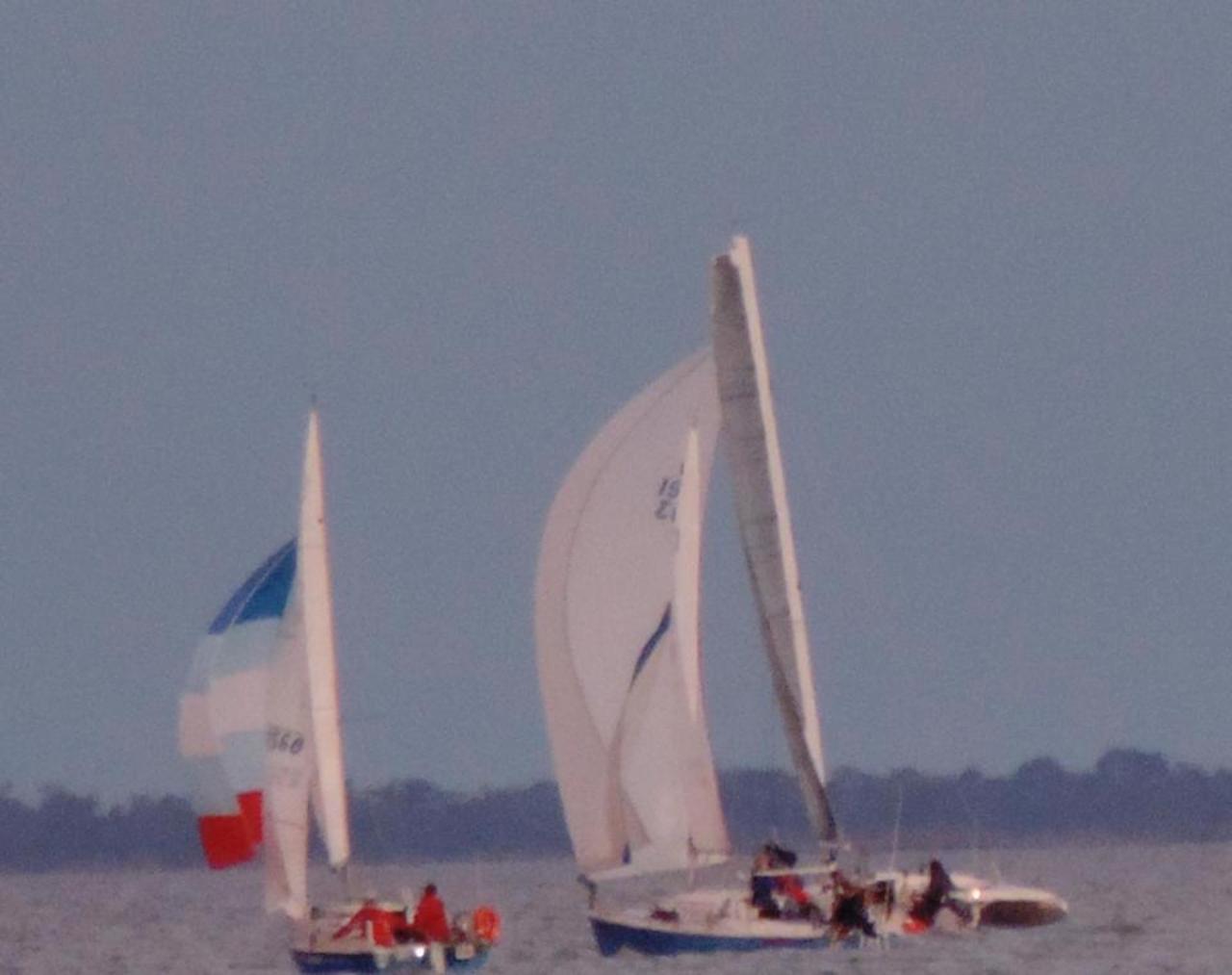 We finally finished as a Family!

After a few false starts and after a real run of bad luck in previous years we finally completed the race as a family (Captain, Admiral and Cabin Boy)! We drove down to Paynesville on the Friday morning, closely looking at the weather forecasts and the wind warnings (predominately westerly) and were quite concerned about how this year would pan out.

Trying to make it as easy as possible we again booked a weekends accommodation at Captains Cove in Paynesville (seemed outrageously expensive when we booked it – but worth every cent when we docked at the end of the race!).

Arriving in Paynesville we had a good look at the weather (howling westerly) and saw a number of boats struggling to get out Paynesville and smash into the wind towards Loch Sport. We made a quick decision to drive the car and boat around to Marlay where we rigged in the carpark of Lake Wellington Yacht Club.

The constant westerly winds had blown a large volume of water out of the western lake, through the straits and into the lake systems to the east. The end results was that the water was very shallow in Lake Wellington and after watching  a Farr 7500 bottom out and get stuck motoring around to the lagoon behind the Yacht Club we left the boat on the trailer and drove back  to Captains Cove for the evening.

Early Saturday morning we drove back to Marlay Point. The westerly winds had abated and we were surprised at how much the water level had risen overnight.  We launched without difficulty and tied Blue Print up to Castle 650 from Canberra YC, and then drove the car with the now empty trailer back to Paynesville. We grabbed a late lunch at the Fickle Fig Cafe and then hopped onto the competitors bus back to the start line.

We listened with great attention to the discussion on the bus, and was interesting listening to a wide range of race tactics and strategies! After a good race briefing and a wonderful speech given by the oldest competitor,  our Cabin Boy won the prize for the youngest crew (9 y.o) and was over the moon with his baseball cap – thank you Lake Wellington Yacht Club.

The race format is great however the westerly winds had really died out, and what little wind there was had swung around to the east, which was the direction we were heading.  This meant that the slower Div A boats were in for a very hard slog when the wind died out in the strait. We watched with envy the boats with the longer water lines and the taller masts (picking up the wind above the tree height in the straits??) pull away from us – and about 11pm we decided that we are now very much on the lookout for a bigger boat to replace Blue Print!

Anchor up without incident! All good to go.

It took us about 1 hr 50 min from the start to the straits; and we had a great run direct to the first mark. There were a few small tacks to get into the straits – and we made an excellent average speed of 4.4 knots which was all good!

Getting into the straights we had both the wind die out and then a 2 knot current flowing East to West trying to take us out the Straits and back the way we had come. There was much discussion about retiring and motoring home or persevering. We chose the latter – and spent the next 15 hours 10 min getting through the straits 😦

To put this in perspective we conducted 208 tacks (av. speed 0.6 knots) and had to put the anchor out at time to stop loosing ground and drifting back the way we had come.

3 hours 15 min from exiting the straits to the finish, a dozen small tacks to get out past the marks and then home – really excellent (av. speed 5.5 knots and hit a sustained 6.3 which for us is very good). Arrived at the finish at 4.01 pm – unfortunately 46 min to late to finish.

We were both really happy with our performance either side of the straits – just need to work on our “river” sailing! 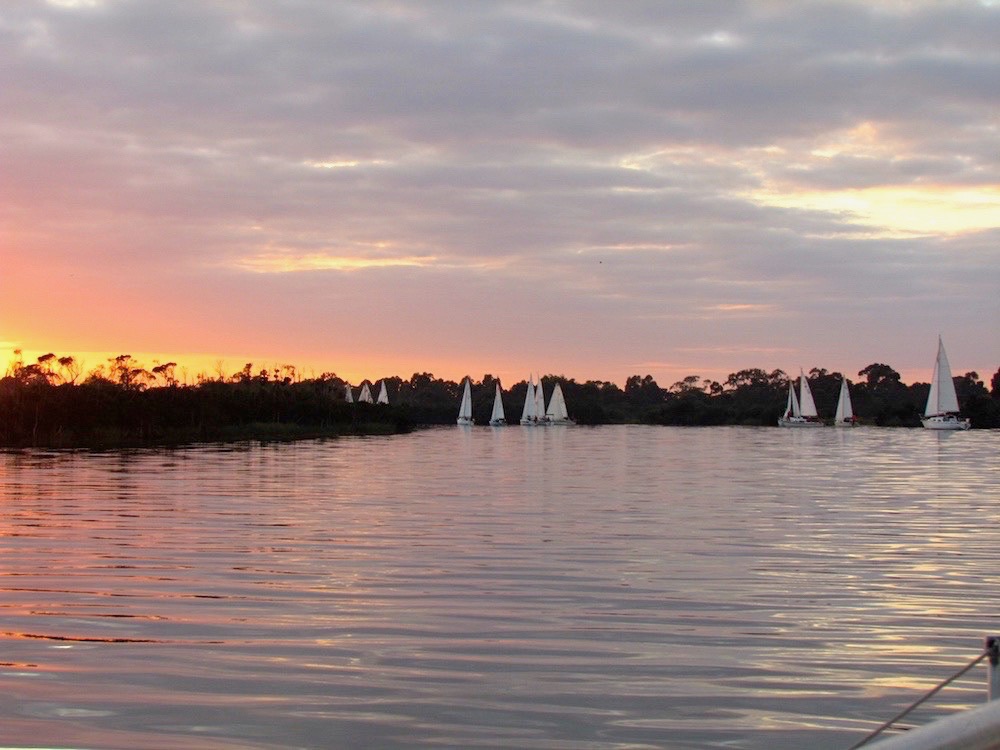 The last corner in the straits before exiting at Hollands Landing

So what did we learn? The MPONR is great to do as a family; get a continuous jib sheet; learn to spot when we are drifting backwards and to anchor earlier! Maybe one more adult crew would help at times. I do note that the Admiral and Cabin Boy had an excellent nights sleep!

Our tacking has greatly improved (GPS track shows some woeful tacks early on – becoming very crisp and “right angled” as we had lots of practice and fought for every metre up the strait! Cabin boy found 20 hours and 16 min without an iDevice taxing towards the end! However any concerns we might have had about the cost of accomodation was quickly put aside when we arrived at Captains Cove, tied the boat up to our own jetty outside our own cabin and step into hot showers, and then bed! 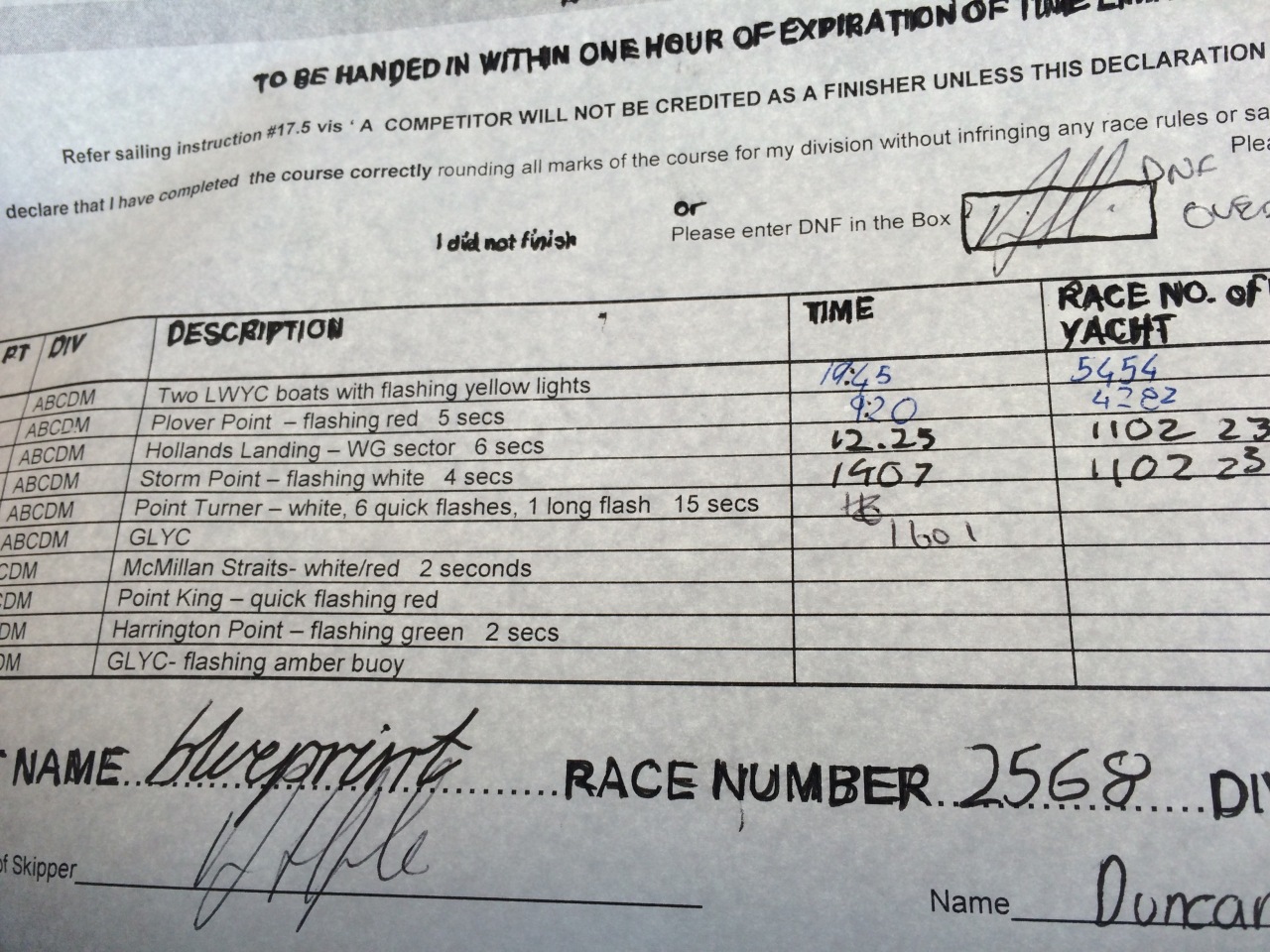 Although we were overtime the race committee declared us as “Finishers” along with another 14 boats from our division that had pushed on to the finish. Only 8 boats of 56 finished in the required time limit, with about 33 boats pulling out for one reason or another.