The end of 2009 and the beginning of 2010 had been a pretty crap time for our family. Cabin Boy had been rushed into hospital with an illness on Boxing Day. He had only been discharged in early March, and was still facing a further 1 ½ months of “hospital-in-the-home” before he could return to pre-school.

He was a pale, small, little thing when we got him home – having been bedridden or in a wheelchair for the previous three months. So the decision was made to take a week off, get him on the boat, and see what benefit salt, sun and sand could have!

We did not want to go too far afield in case we had need of medical advice, which ruled out the South Coast/Sussex Inlet/St Georges Basin, so we decided to take the boat up to Sydney and explore Cowan Creek and the lower Hawkesbury River – protected, accessible and close!  I had also sailed around this area with my parents when I was a child and it was vaguely familiar with fond memories.

So a second hand dinghy was quickly located and purchased in Canberra, and we loaded up the car and drove to Ku-ring-gai Chase National Park where we rigged and launched at Apple Tree Bay boat ramp on 3 March 2010.

We motored around to Empire Marina to have a look around and then headed around to Smiths Creek and pottered around Stingray Bay, Twilight Inlet and then into Kindred Bay where we picked up a public mooring. The Admiral and Cabin Boy couldn’t wait to get into the dinghy and take it out for their first row! 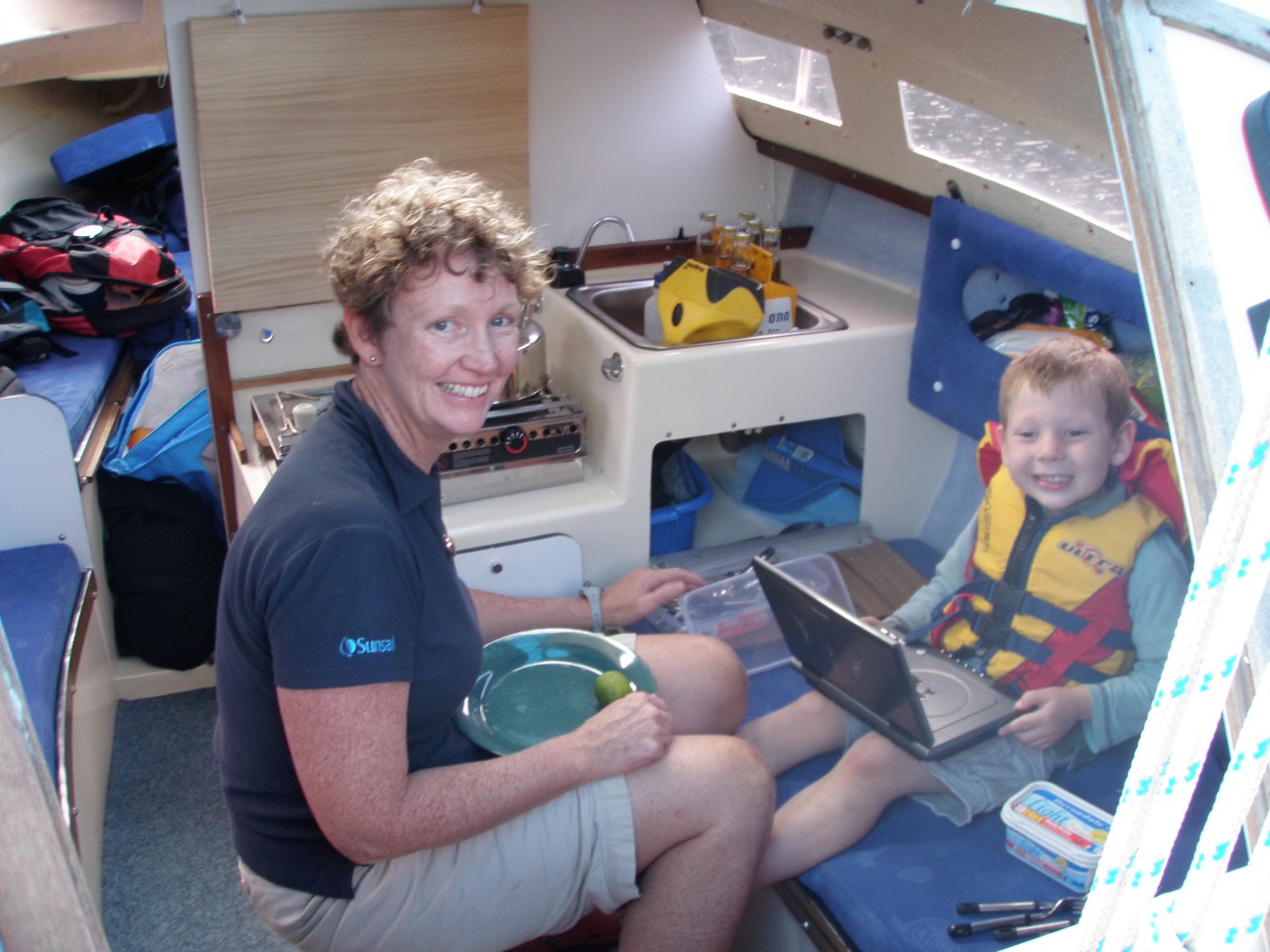 Everyone happy to be on the boat 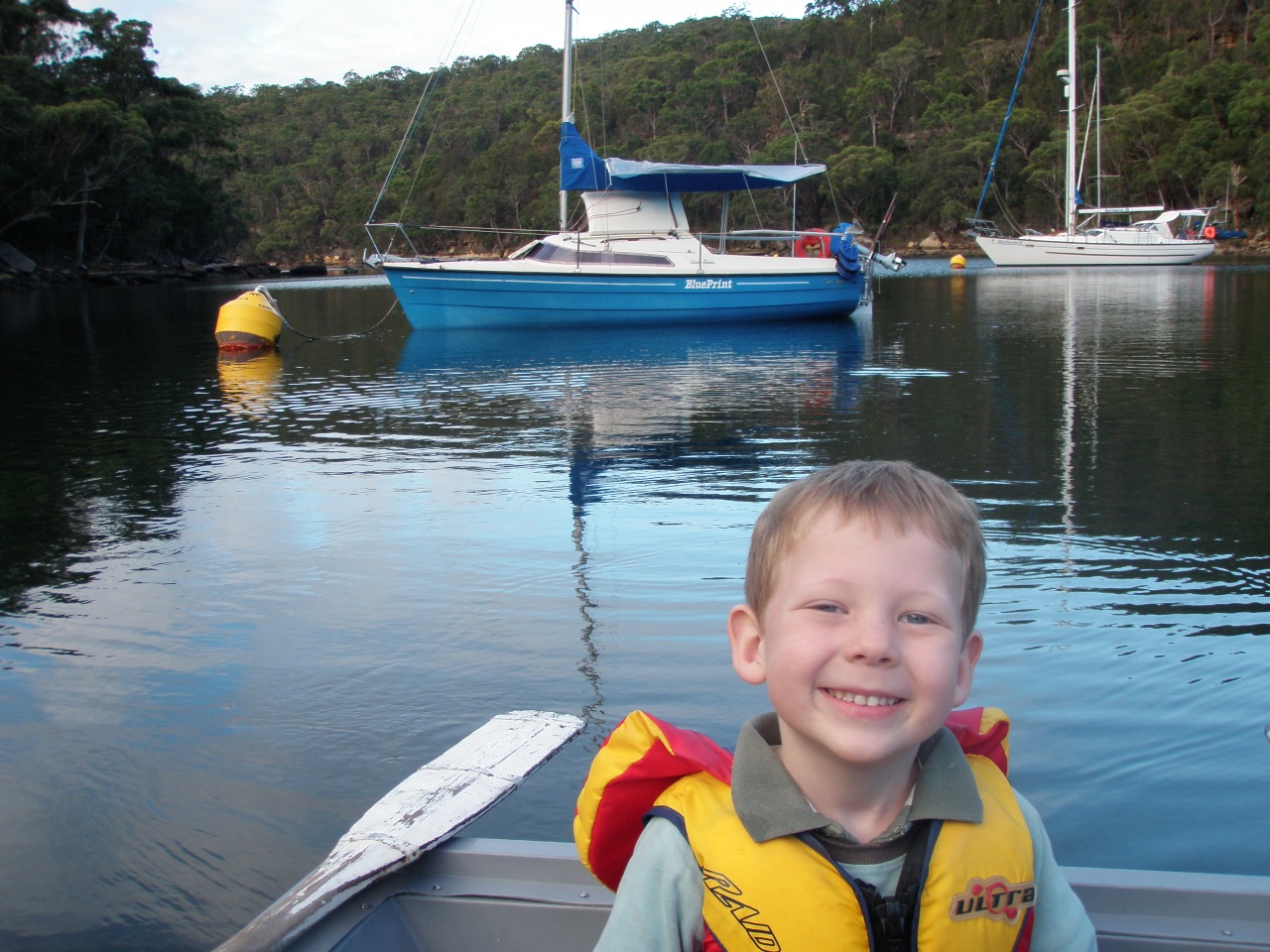 Trying to get some sun!

We awoke to be surrounded by jelly fish! Cabin Boy was amazed by them, and decided to name them all “Bob” – which has stuck to this day! He was quite impressed when we later ran over them and the outboard prop turned one “Bob” into four “Bob’s”! 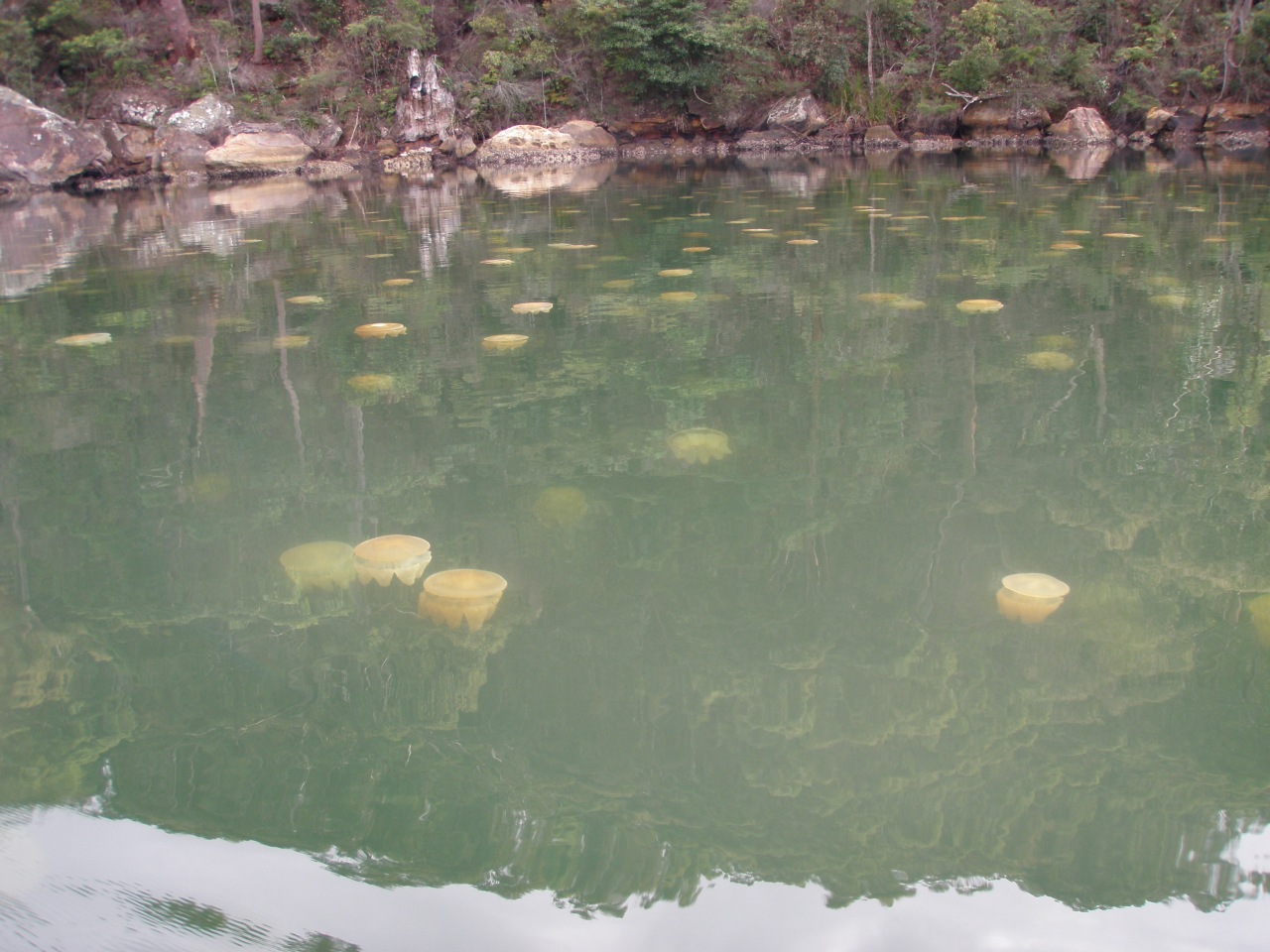 After breakfast, there was barely a breath of wind, so we motored back to Empire Marina and took a berth while we waited for my parents to arrive. We crammed everyone onto the boat and then motored about 1 ½ nm to Lords Bay where we had a picnic lunch on the boat before returning back to the marina at 4 pm. After saying goodby to the parents we explored the marina and settled into the common room with Cabin Boy to watch a movie before retiring back to the boat and to bed.

After a leisurely start we purchased some ice, topped up on fuel and headed off to Looking Glass Bay and Jerusalem Bay. After some light winds and sporadic sailing we headed into Hallets Beach and picked up another mooring for the evening. Overcast and drizzling rain we set up the boom tent and awning, brought out the Cobb Cooker and cooked sausages while having a Corona for lunch! If only it was warmer. After lunch we headed off to Refuge Bay where we picked up a private mooring with some trepidation – however we reasoned that it was mid-week, unlikely to be used, and that the CYC markings must of course mean Canberra Yacht Club!

We rowed ashore in the drizzle to stretch our legs and to take Cabin Boy for an explore. Interestingly he wouldn’t take off his life jacket, and demanded that he wear his rain coat over the top in case he got wet. Then he insisted on going for a swim! 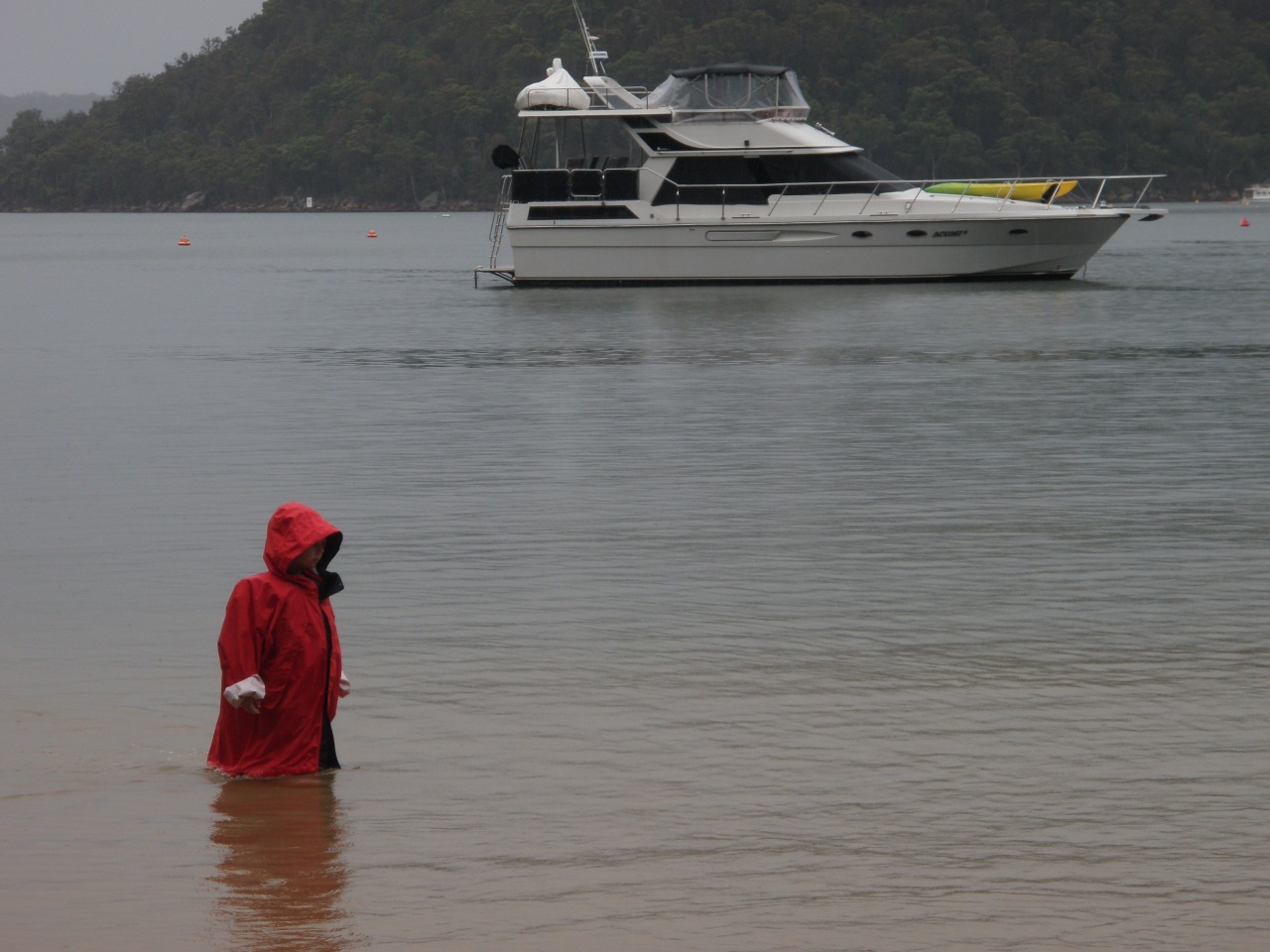 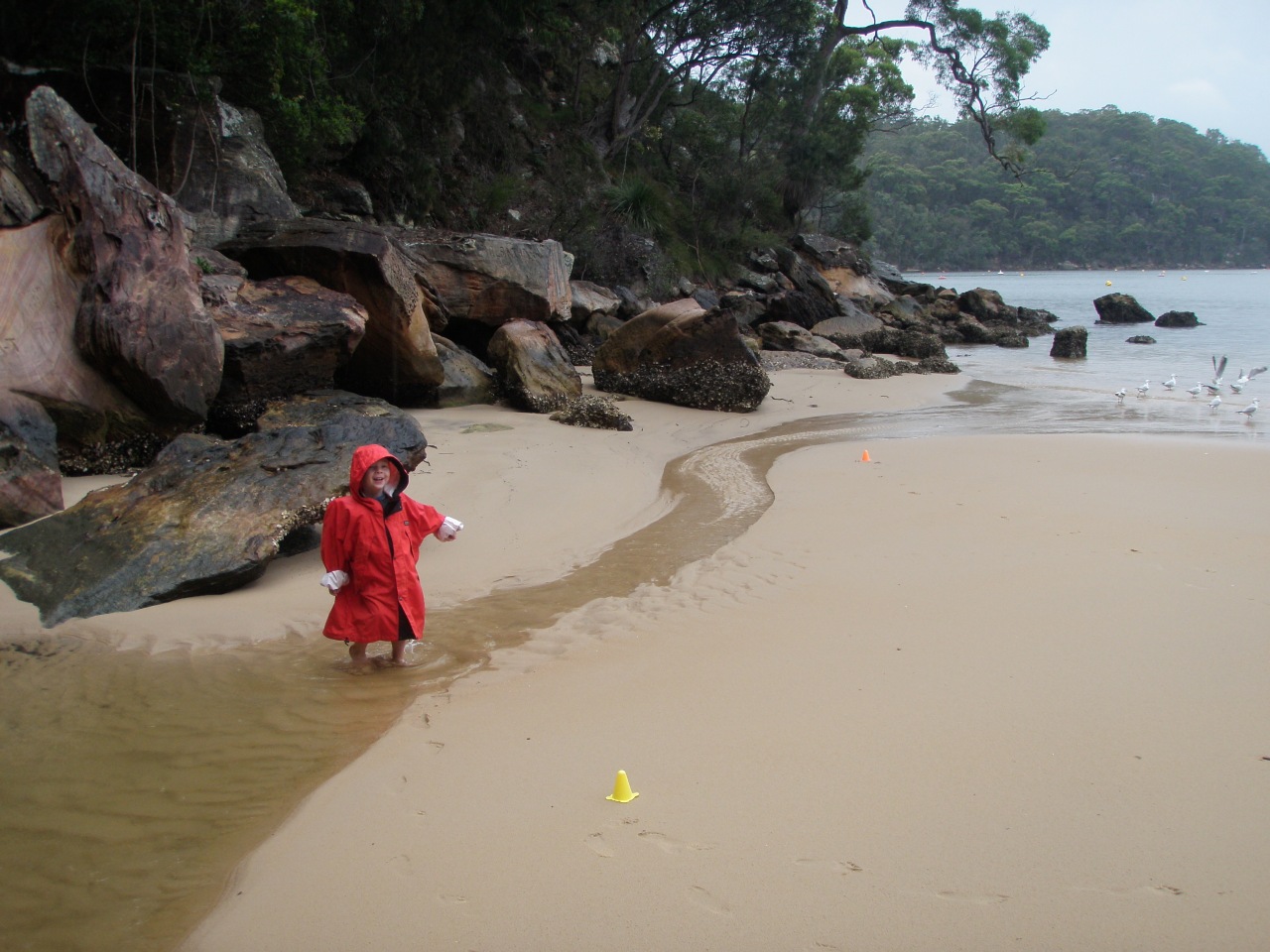 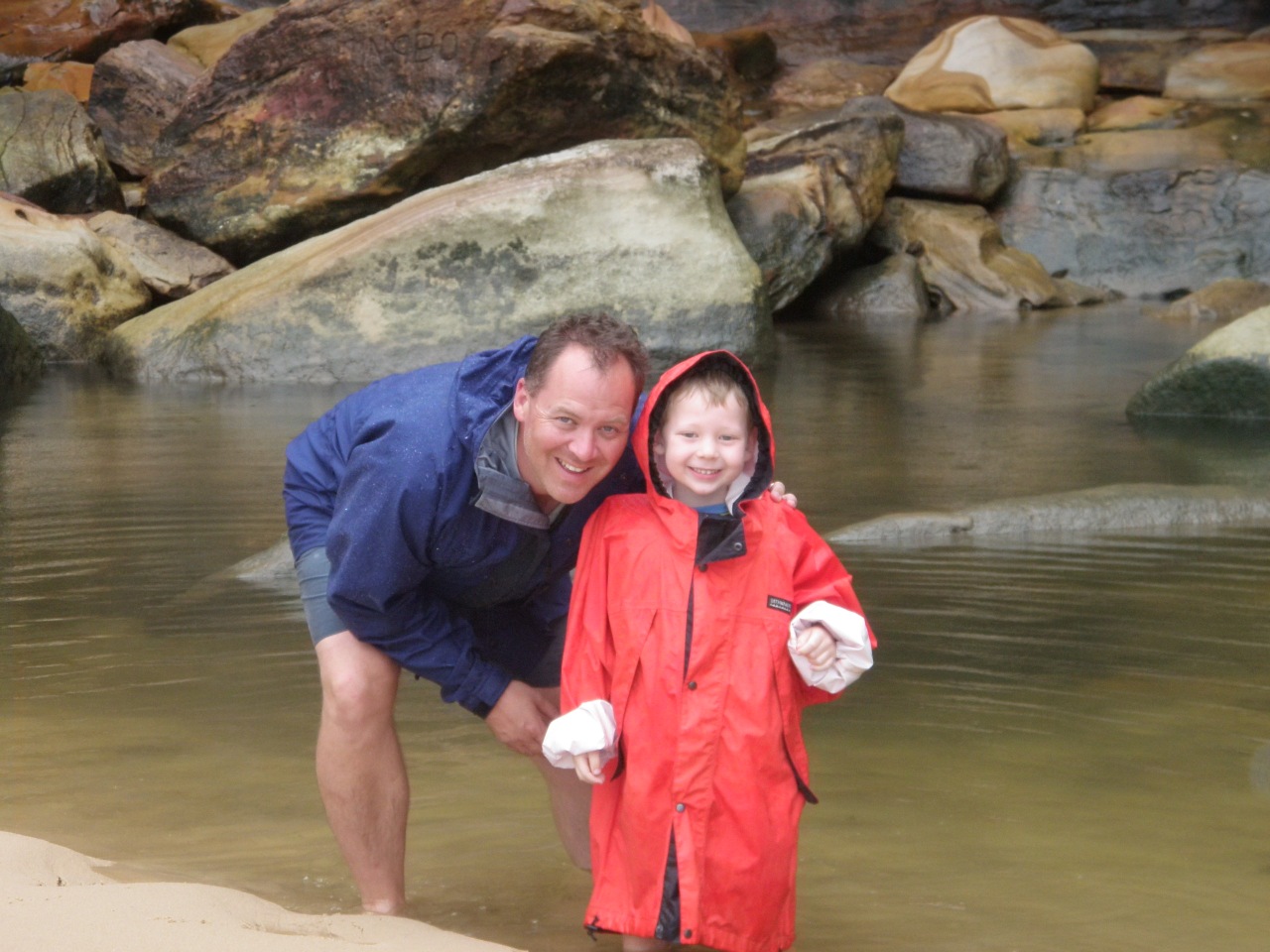 After dinner on board we rowed across to visit a couple of other trailer sailers who had arrived in the Bay. A lovely group of people, they were the first of a number of boats gathering from the Newcastle & Hunter Trailer Yacht Association, who were planning to head up the Hawkesbury River and visit Berowra Waters.

It all sounded very adventurous to us at the time, and in hindsight we were very lucky to have found them as we would not have been so adventurous on our own, given our inexperience and the circumstances of this trip.

Deciding to join the NHTYA group we headed off mid morning in company, stopping near Brooklyn to wait for some boats to launch and then following in line as we went under our first bridge!

Heading up the Hawkesbury 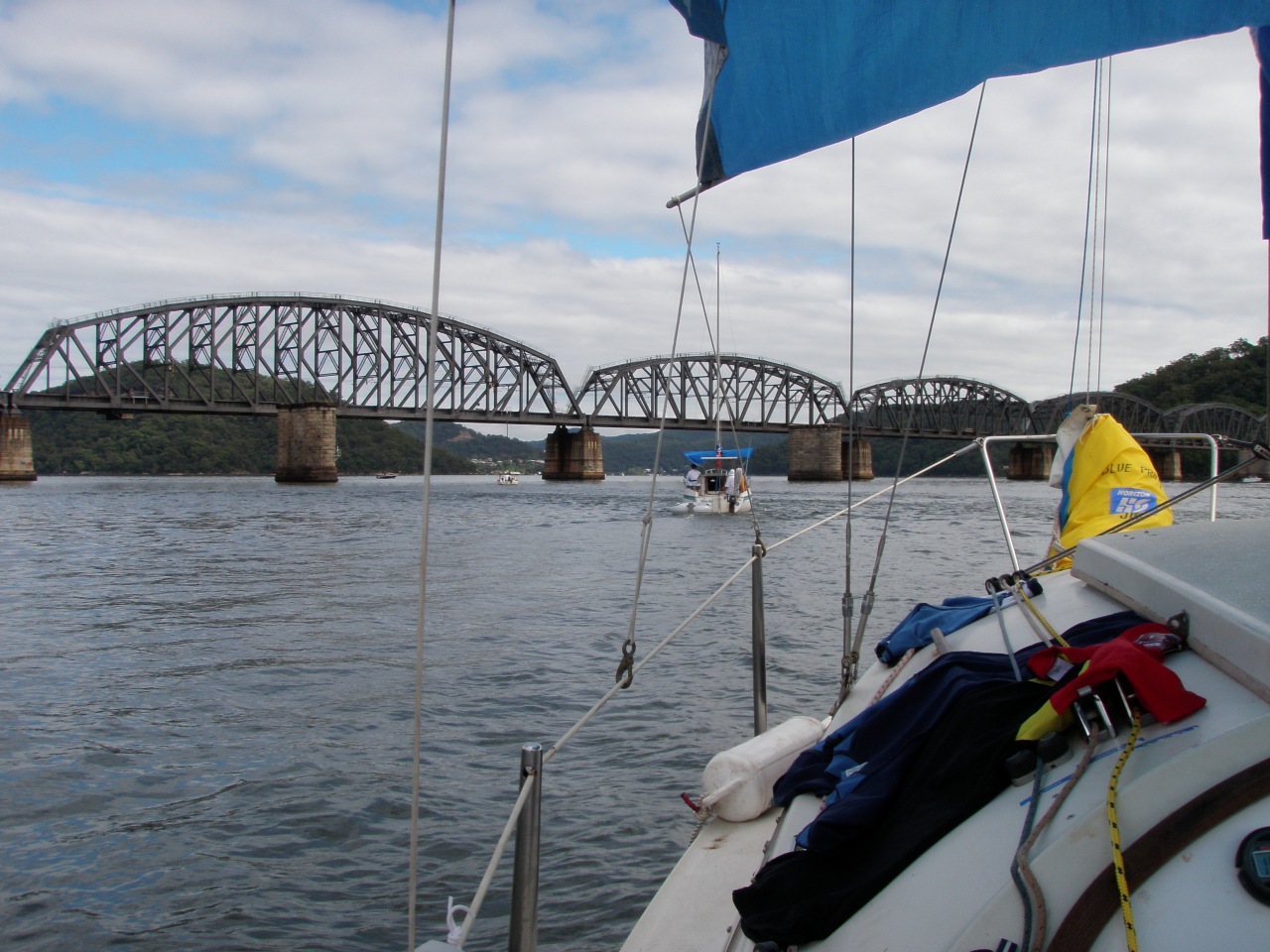 Looking ahead with some trepidation!!

Motoring for several hours we stopped in Joe Craft’s Bay, on the southern side of Berowa Creek where we rafted up (also for the first time!) with four other boats while we had lunch.

Later we continued on to Dusthole Bay Marina at Berowa Waters to find a park to let Cabin Boy run off some energy!

After a good walk we returned to Deep Bay / Joe Craft’s for sundowners and then dinner and bed.

We awoke at about 0630 to a Kookaburra’s calling to each other and an anchorage that was shrouded in mist and fog. 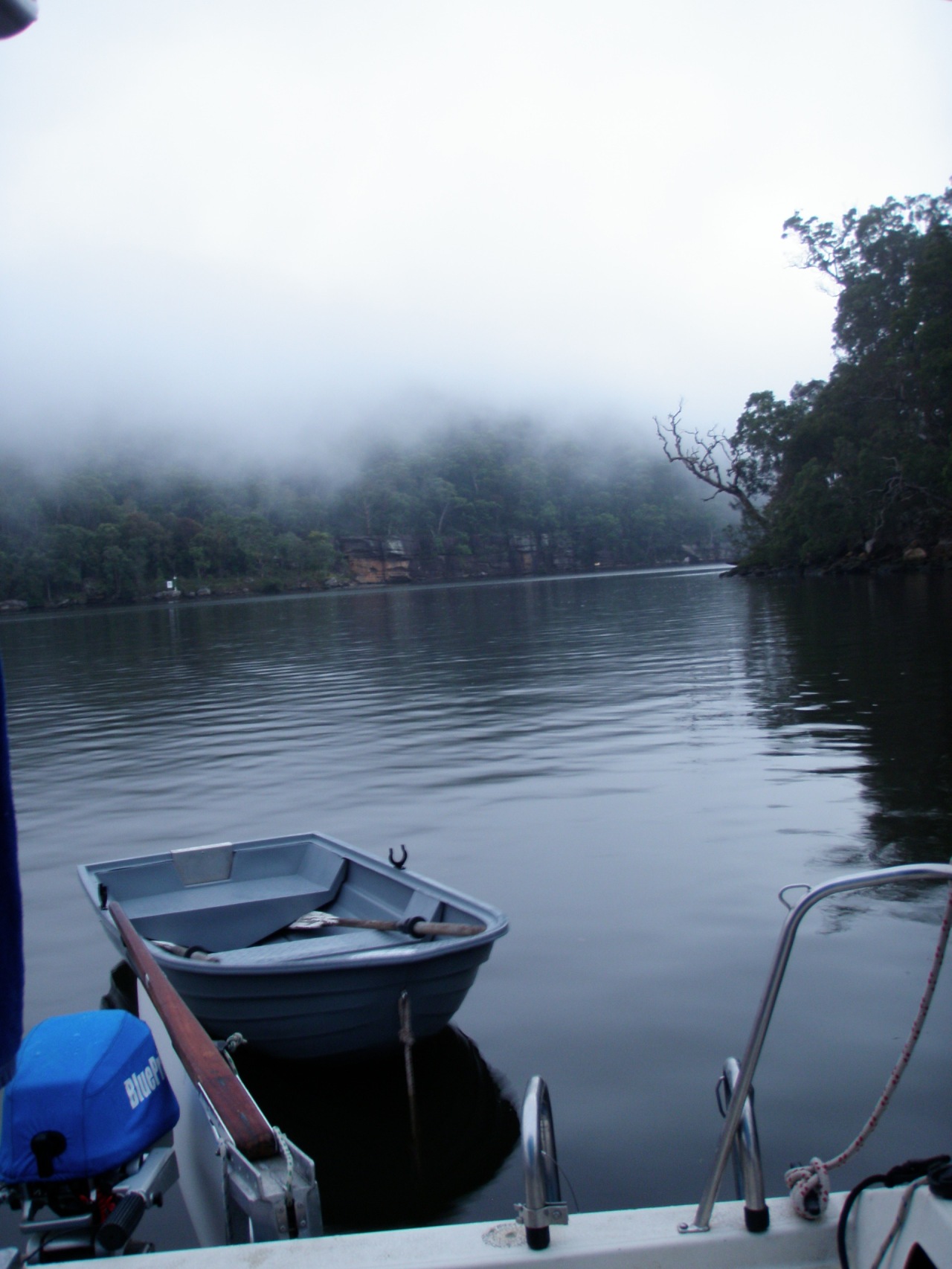 As the Admiral prepared breakfast, I did jobs on the boat and we decided that it would be a good idea to quickly return to Berowa Waters, take the lad for a run and play in the park that was adjacent to the small marina, and to top up with fuel. We only had the one 12 litre fuel tank as we had not expected to travel so far – and quickly discovered that we had consumed 7 litres getting here! Lucky that there was fuel available – sheer luck not planning.

After the fog lifted – a different place

We pulled back into Deep Bay afterwards and decided to take our leave of the NHTYA group as they were heading further up the Hawkesbury, and we were running out of time and wanted to get closer to Cowan Creek.

We then motored back past Dangar Island and Brooklyn. The wind had picked up a lot and we raised the sails. We found ourselves quickly overpowered and the Admiral was not looking happy, so we hove to, dropped the main and carried on under jib only back to Refugee Bay where we picked up another mooring.

Rowing ashore we went exploring and found the Z Special Force plaque that commemorated the special force raiders who had trained in Refuge Bay, and used it as their start point for the long journey to Singapore to destroy Japanese shipping.

After burning off some energy running around the small beach, and with it still drizzling we returned back to the boat for dinner and bed. That evening a southerly front came through, and although well protected and secured to a large private mooring, it was our first experience of lightening, thunder and howling wind at night. We never felt threatened but, as a first for us, it was still disconcerting!  What was probably more disconcerting was the rental houseboat which partied until 0300, and also moved several times around us during the night to get out of the prevailing wind.

After breakfast we left at 0800 and headed back down Cowan Creek towards Apple Tree Bay where we recovered the boat. We were safely on the trailer by 1030 and home by 1430 that afternoon. We all decided that it had been an excellent trip, which saw us travel a lot further than we had anticipated (75 nautical miles). We were very lucky to have been adopted momentarily by a group of more experienced trailer sailers who showed us new ways of doing things – from their boat setups to rafting up to exploring. 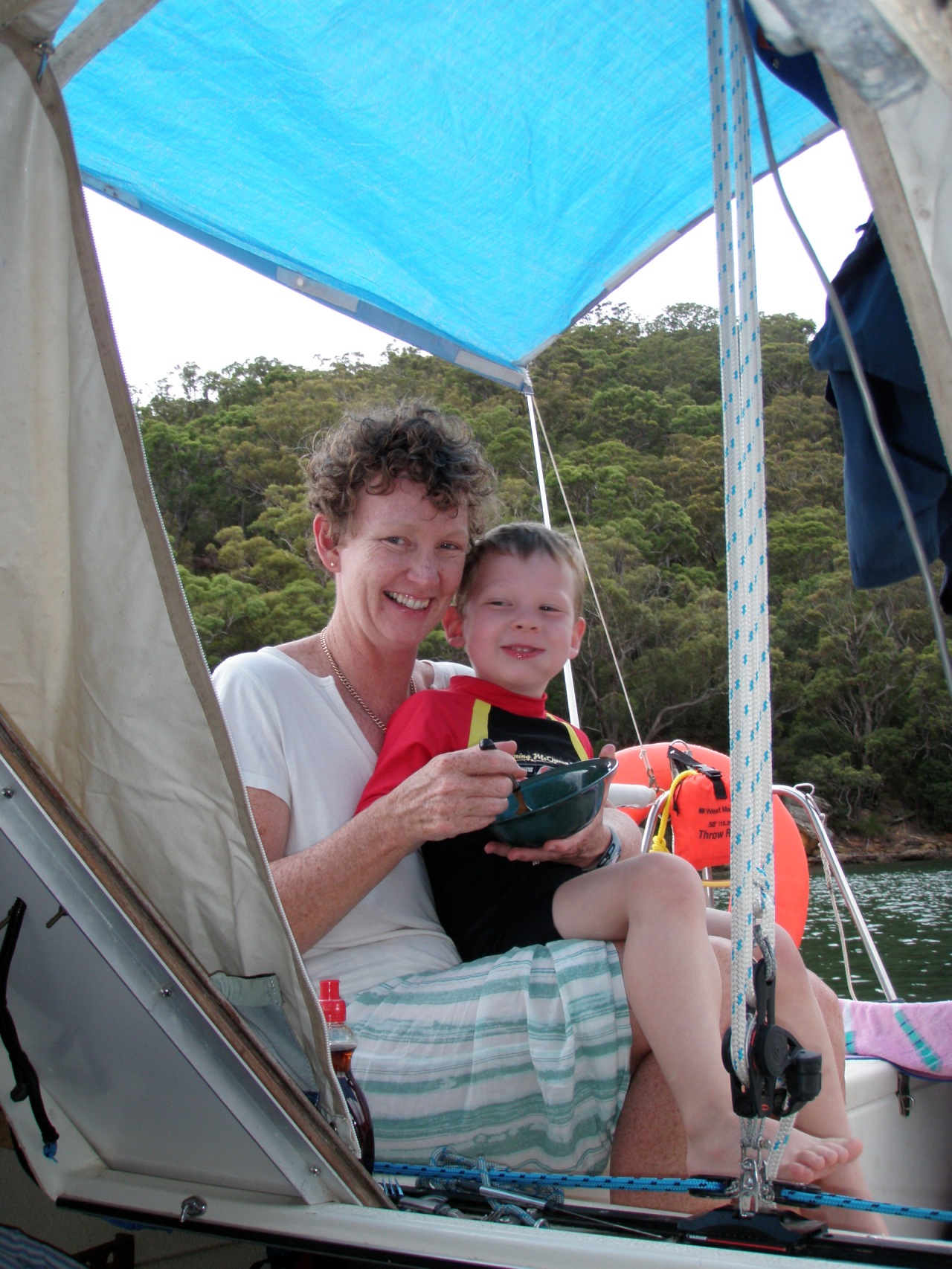 The crew enjoying themselves!

Cowan Creek – Hawkesbury River – Berowra Creek and then back